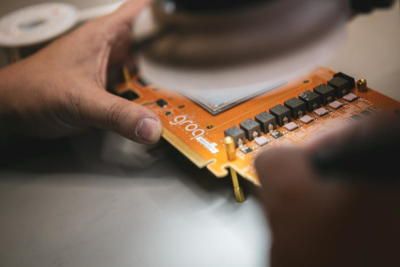 OAKLAND (Reuters) – Silicon Valley venture capitalists, long focused on software and internet companies, are again pouring money into the semiconductor industry, lured by the promise of a new generation of artificial-intelligence chips that could challenge incumbents like Intel Corp and Nvidia Corp.

The new wave of semiconductor innovation will do little to address the shortage of chips based on older technology that is currently plaguing the auto industry and others. The shortage stems from a confluence of factors as carmakers, which shut plants during the COVID-19 pandemic last year, compete against the sprawling consumer electronics industry for chip supplies.

The enthusiasm for chip startups is mostly a result of the need, by companies using AI software, for special-purpose processors that can efficiently run machine-learning algorithms requiring huge troves of data – the heart of the booming artificial-intelligence business.

Upstart chip-makers including SambaNova Systems, Groq, and Cerebras Systems all say they are making chips that can perform AI tasks better than processors from Nvidia, whose multipurpose graphics chip sets – originally made for video games -now dominate the AI market.

“How can a car be good at being fun to drive and good to take the kids and soccer balls to soccer practice and carry freight and bricks and garbage? The answer is it can’t,” said Andrew Feldman, co-founder and CEO of Cerebras Systems, arguing that AI algorithms need specific chips rather than chips that can serve multiple purposes.

Cerebras’ innovation is a very large chip, 56 times the size of a postage stamp, that packs 2.6 trillion transistors.

Gartner analyst Alan Priestley has counted over 50 firms now developing chips specifically for AI applications, and said there may be more. He expects the market to be worth over US$70 billion by 2025, up from US$23 billion in 2020.

Venture funding for U.S. chip startups reached US$1.8 billion last year, the highest level in at least two decades, according to data firm PitchBook. Another US$1.4 billion has already been invested this year.

In April alone, SambaNova said it raised US$676 million for its reconfigurable AI chips. Groq, which boasts of a super-powerful single-core design that is fast and easy to program, announced it had raised US$300 million. The CEOs of both companies told Reuters the funding rounds were bigger than planned due to strong investor interest.

The opportunities are now piquing the interest of predominantly software-focused venture capital firms such as Battery Ventures, Bessemer Venture Partners, and Foundation Capital. They were among the most active semiconductor investors over the past two years, said Brendan Burke, analyst at PitchBook.

Battery Ventures’ general partner, Dharmesh Thakker, said he started considering chip investments a few years ago after he noticed his AI software companies were all working with Nvidia.

“We said, ‘Hey, there might be an opportunity to build another Nvidia in that whole space around AI.'” Bessemer Venture Partners and Foundation Capital did not respond to requests for comment.

Ian Buck, Nvidia’s general manager of accelerated computing, said he is confident the company will stay ahead in the AI chip game. Nvidia GPUs have been evolving over the past seven years to meet AI software needs, with some chips specifically designed to handle AI.

All this activity is coming as the U.S. government finalizes new subsidy programs to support the domestic chip industry.

Andy Rappaport, a new board member of Groq who has invested in chips for decades, believes the geopolitical instability and competition between the United States and China could even drive venture capital firms to invest not just in chip design companies but even manufacturing. “If the federal government wants to goose my returns and underwrite my risk, then you could see a credible scenario where a new manufacturing player could emerge,” he said.

That, in turn, could trigger even more bets on chip-design firms. “If I knew manufacturing was no longer an issue, it makes it easier for me to invest in the IC companies,” said venture capitalist Hany Nada of ACME Capital, referring to integrated circuit, or chip, suppliers.

Ironically, with AI chips it is getting easier for AI algorithms to improve chip manufacturing, bring costs down, and open up manufacturing again to startups, said Matthew Putman, who started Nanotronics in 2011 to do exactly that, and had an early investment from Peter Thiel’s Founders Fund.

By 2019, Nanotronics had raised about US$90 million. And Putnam is no longer worried about where funding will come from.

“In 2013 or 2014 when I would go in and literally if you didn’t have an app or any kind of enterprise SaaS software, you wouldn’t even get past the receptionist,” he said, adding that was even after Founders Fund had invested. “That has changed, a lot.”